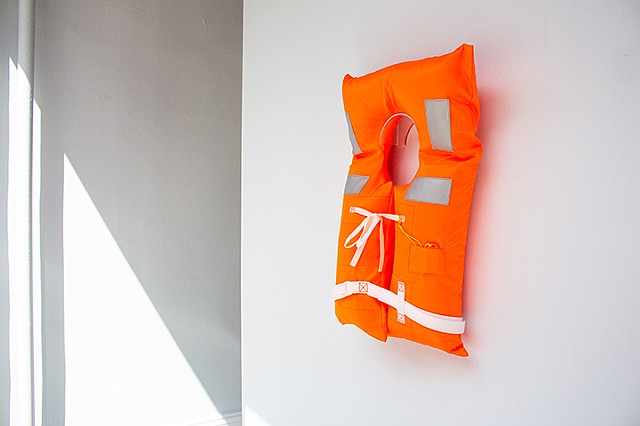 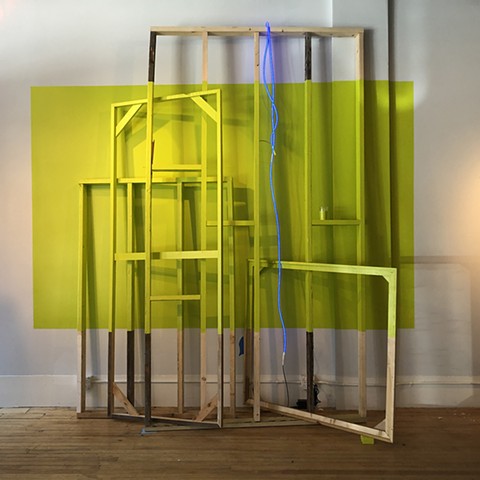 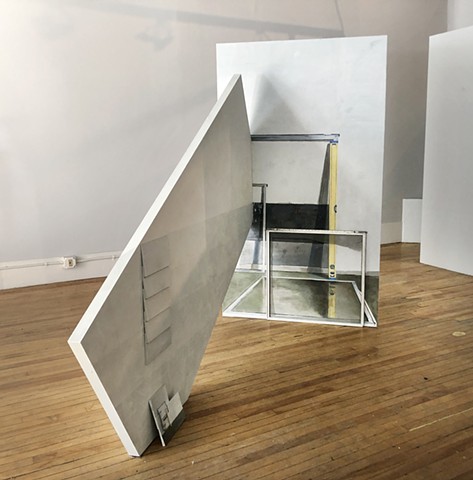 In his book Realist Magic, author Timothy Morton describes the complexities of understanding what a mundane concrete block actually is. An especially memorable passage anthropomorphizes a distinctive concrete block. “The block extrudes its tongue and gets a lick of its cool, rough, grainy hardness.” Morton is asking how we ourselves could possibly know what a concrete block is, if it can’t even know itself. This short description has run itself through my brain over and over again since I first read it years ago. It is so sensational. A block extruding a tongue? That's pretty perverse. It's gritty and sensual. Admittedly, philosophers have often used similar tools to shock the reader out of the mundanity of reading a tedious philosophical text. And it’s an effective one: I’m still thinking about that damn block.

Artists do studio visits differently than everyone else. We always look for how things are made and are often distracted by the stuff around the studio. We inspect the tools, yes, but also the debris, the inspirations, the materials. In Brillhart’s studio, I found a small section of fiberglass I beam. It was about two inches long. It was a funny object - too short to be used for anything but still lifes. Faler’s studio had almost no tables, just a lot of work on near-pristine floors. How does that change the way you make art I wondered?

During these visits, I found myself returning to Morton’s concrete block as a touch point. How would the fiberglass beam suddenly “extrude a tongue?” What if Faler found a concrete block licking itself in the corner of her studio? Through this, I began to rethink the concrete block scenario. The passage became a frame to explore the work in The Taste of a Cinder Block… leading to the different ways in which each artist approaches their work and the array of stuff around them.

Jenny Brillhart arranges what would be considered mundane objects. She waits and watches time pass over them and uses them as source material for her paintings, or as set-ups or sculpture. The result hovers somewhere between abstraction and representation. Her work teems with the energy of objects but skirts a strict definition of still life. In Held, a physical shelf leans sidelong against another—but its shelfness seems to be in question; painted in places, wood grain showing through in others, it pushes back and forth more like a painting. The shelf holds a few vaguely familiar objects alongside pinned-up images and miniature paintings that also lean against it. It’s hard to understand what exactly you’re looking at, and this only draws you in farther. The effect is an uneasy yet heightened awareness of where you yourself stand and the quality of your attention.

I wouldn’t be surprised to see Morton’s concrete block in one of Brillhart’s paintings. Its cold greyness would be right at home. As a compositional element, the block is actually quite striking. It maintains what I can only describe as severe and rational—or even better—dumb and standard proportions. Yet it makes complete sense. It seems to me, that in Jenny’s world, the block would never extrude a tongue, though. It’s unnecessary, and it’s not object-like. In Brillhart’s paintings, objects are achingly staid. They just wouldn’t be that dramatic, it’s below them. Here, they remain dull, greyish, and infinitely subtle. Everything—tones, colors, shapes—are so quiet that you begin to see things differently and with a heightened sense of awareness.

It’s as if Brillhart is saying to us: “we don’t need tongues - these things are fascinating as they are.” She leads you to explore the objects on their terms, not yours. This is a place of subtlety and not the sensationalized world of concrete tongue licking. Blocks--functional, physical, and taking up space are enough.

In contrast, Faler begins from a decidedly sculptural background. Her work appears to grow out of studio detritus and presents a beautiful yet ambiguous array of objects. In Cope and Drag, what appear to be large painting stretchers simply lean against the wall. The illusion we expect on their face spreads across the entire wall, creating a green-to-white horizon line. A singular cobalt-blue neon tube casually hangs over the top. Your sense of what is in the room with you is distorted, while objects become images of themselves and visa-versa.

In Faler’s work everything is possible. Even a block with a creepy tongue. Faler would lean into it though. In my imaginary world, she’d exclaim; “Hold on a minute, is that a concrete block licking itself?  …Wtf?”, she would then proceed to blow it up 10 times its size, reproduce and stack 100’s of them, or simply gold leaf it.  Faler makes you look - and asks: “why a tongue?”  What does that really mean when Morton goes right to the perverse? She’d press harder and ask “why?”, “in what history?” “in who’s history?”  To Faler, the tongue is no surprise - we just need to double down and figure out what it’s doing there.

In a way, Faler’s work bucks the notion of understanding the completeness of the object - in the much same way that Morton does in the remainder of Realist Magic. She asks us to go beyond and get lost in the muck of everything. In the context of the thing. In her work, you’re too busy fussing over the gold-plated grape stems to notice the concrete block’s tongue. No wonder there’s almost no detritus in the studio. Faler demands your attention then and there - in the work and the work alone.

In Saldaña’s work, the artist crucially becomes the manufacturer; making, designing, and reproducing what we often call everyday objects. A book of matches made by hand—that is, a boring, average, not unique at all book of matches—becomes fraught with complex meaning and context. By switching out the maker, Saldaña questions the motivations of its production and even an entire system of distribution and consumption. And, somehow, with no slight-of-hand at all, the book of matches becomes a mirror that reflects one’s own role in a complex system.

Saldaña embodies the block - she remakes it (in my imagined world, once again). A few pages after the licking in question, Morton talks about another way to understand the concrete block. This time, he uses an imaginary machine that explores its every aspect. But when it is done, the block itself is gone. The exploration has broken it into nothing. It has been poked and prodded, scanned and analyzed, out of existence. To know the block is to destroy the block.

In this scenario, Saldana’s work is the rebirth. Instead of breaking it down to understand it, she creates. She steps in, ignores our tongue and just makes the object itself. Again. Not an image of the object - or a recreation - she simply creates another. It’s an act of resurrection, but also, pulls into question our need to represent - to analyze as Morton does. Why not just create? And, isn’t this the true act of knowing? Isn’t creation the thing that lies on the other side of knowing?

So, what is the conclusion to this block licking incident? Is Brillhart correct in that the tongue doesn’t really matter? Or is it just another part of our complex and messy world, like Faler’s seems to suggest? Or, should we focus on making, the creation, the manufacturing? The answer seems to be: none of these really. Because these artists ask you to look. And instead of leading your eye to a chosen subject, all three dwell on the question of attention and the objects themselves. It’s the exploration, it’s the making, the messing up, the process, the previously-thought-useless-section-of-I-beam, it’s the dull trudge and the manic humanness, it’s the mish-mashing, and soaking in the thingness that is important.

Importantly, unlike common convention among artists, these three don’t take sides or force a specific stance. They simply ask you to look closer, to be more sensitive, to double check your own stance - a prompt that is sorely needed in a time of hyper-vigilantism and an increasingly binary understanding of the world around us.