M. Albertson Hannah Boone Heather Flor Cron Alejandra Cuadra Jay Katelansky Jack King Athena Lynch Veronica Perez Kendra Sanborn Golaleh Yazdani There is a notion that if a bird gets a hold of your discarded hair, and makes a nest from it, that you will lose yourself.

What we have collectively seen and experienced this past year leads us to a sense of sitting with our silences. In this show, those silences, turned to voices and began resounding in the work. Golaleh Yazdani and her mattress people, sit stagnated, silently gazing upon one another attempting to validate one another’s existence in this world. Kendra Sanborn’s work echoes these attempts at validation as her painting slowly unfolds the merging of two entities, silently weaving in and out of one another, just as the work of Veronica Perez’s hair blanket draped over the balcony sits and waits.

We sat with our silences Until they became deafening.

The work in undercurrents ebbs below the surface, pulsating to get out. The works-- colorful, large, flowy with uninterrupted marks -- are

Jay Katelansky’s work, a triptych of 3 mixed media pieces, creates a palimpsest from daughter, to mother, to grandmother and speaks to safety and security. Alejandra Cuadra’s work becomes intertwined with the present and the past, weaving together stories of mother and daughter.

This show is about how materials, identities, words, come together to create a unified existence. There is a unification in the work of Hannah Boone: in their Rope Bunny series, forms slumpily sit tethered by intricate knots and the forms that are present are as result of Boone’s purposeful placements of these knots. While Jack King’s disparate materials expose and converse with ideas of femme identity using representations of perfection.

This is letting us determine our identities --weaving pieces of ourselves and histories throughout the narratives of our lives and works. Themes of history, identity, hybridization, beauty, and existence are present in the works. Athena Lynch’s work (will get title) stretches to the heavens and gives a sense of the overlapping iconographical imagery between sacred religions and how they have been whitewashed for consumption. There are religious overtones revealed in M. Albertson’s work (will get title) where a mother and daughter embrace in a pieta. Revealed is the space between mother and daughter - coursing with energy and palpable pasts and futures. 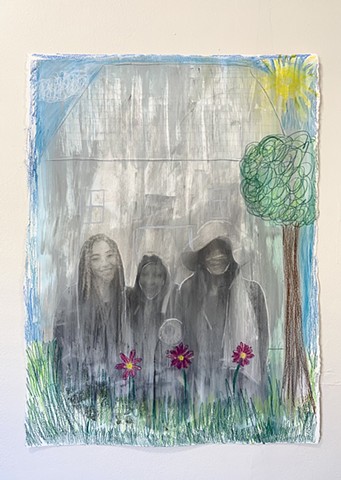 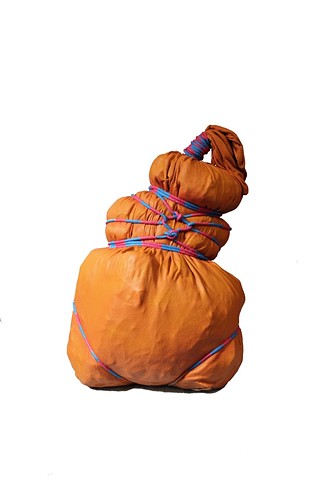